The Most Unusual Christmas Trees

The year is almost 2015, and modern life continues to dictate its rules in all aspects of life. In the XXI century it is hard to surprise anybody with a traditional fir-tree, despite its beautiful decore. For this reason from year to year different countries secretly compete with each other not only in careful observance of traditions, but also for a rank of creators of the most original New Year tree. We bring to your attention the most unusual Xmas trees from all corners of the world! 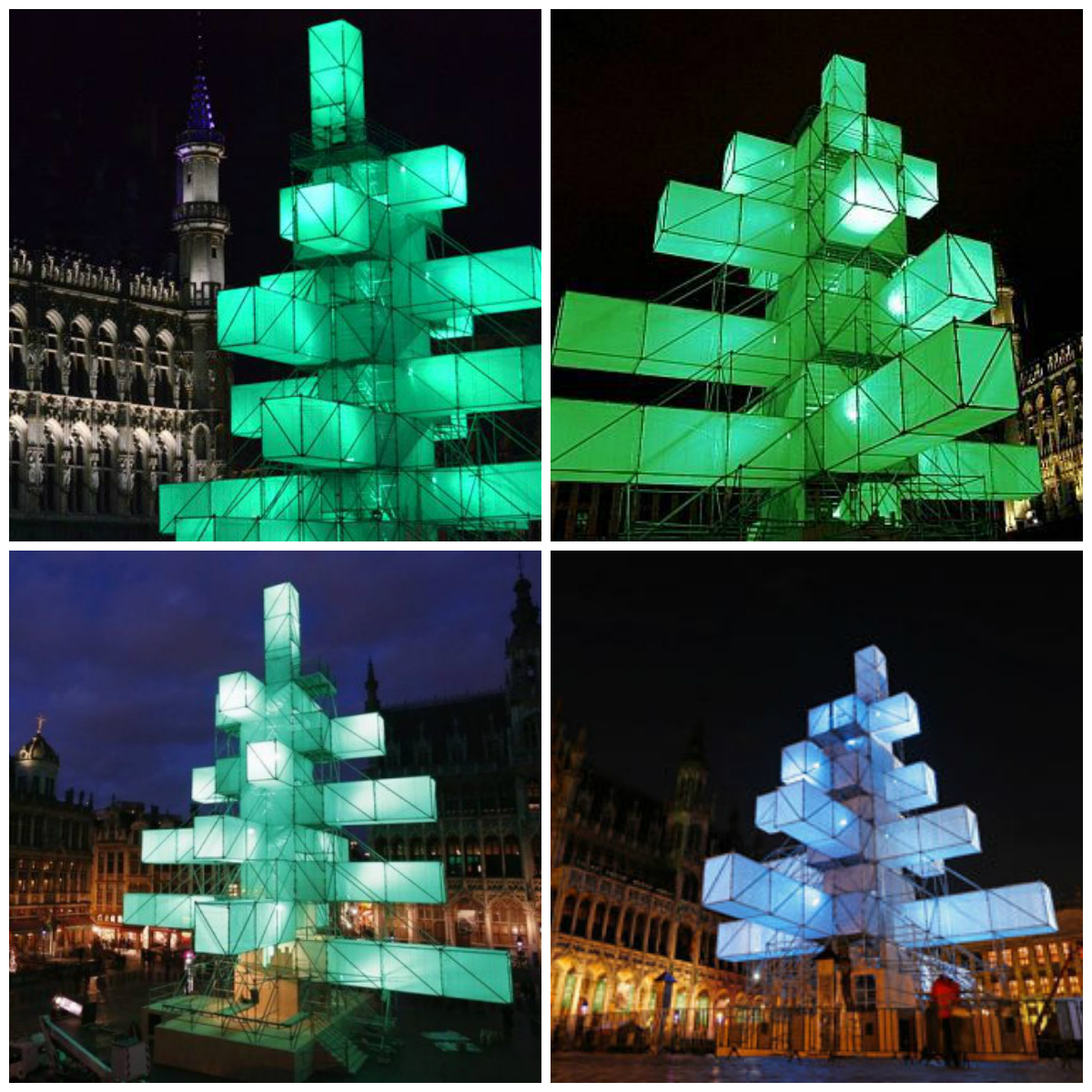 In 2012, the Brussels authorities made an unexpected decision not to establish normal green coniferous tree but a luminous metal structure of very unusual shape. Derogation from tradition wouldn't be such scandalous, if not the statement of the member of municipal council Bianka Debaets. According to her, the choice of such a construction is due to religious reasons, as usual tree is a symbol of Christian Christmas, and Brussels is home to the vast number of Muslims. This statement caused a major stir in the society, the Internet even started a campaign against such innovations, and authorities decided to dismantle the "pharmacy tree," as it was nicknamed by residents.

The biggest fir-tree on water 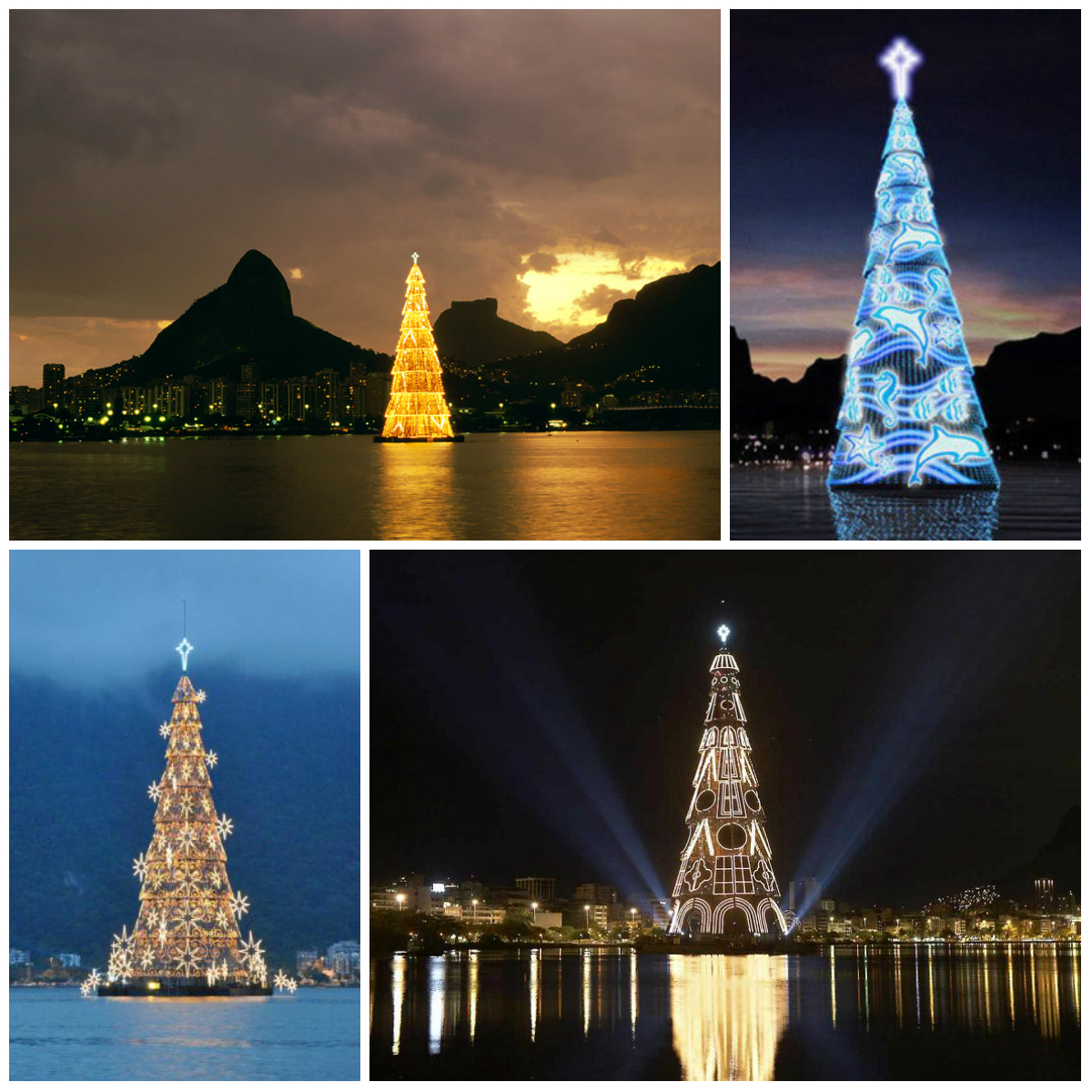 2013 was remembered by residents of Rio de Janeiro not only because of the New Year's celebrations in the best traditions of the homeland of carnivals, but also because of the record holding Xmas tree. Its peculiarity is that it has been installed on the waters of Rodrigo de Freitas Lagoa. The height of the creation is nearly 85 meters, thus making it the largest and most beautiful Christmas tree in Rio since 1995. Stunning illumination constantly changed colors and patterns, drawing some forest animals, marine life on a blue background.

Christmas tree made of pure gold 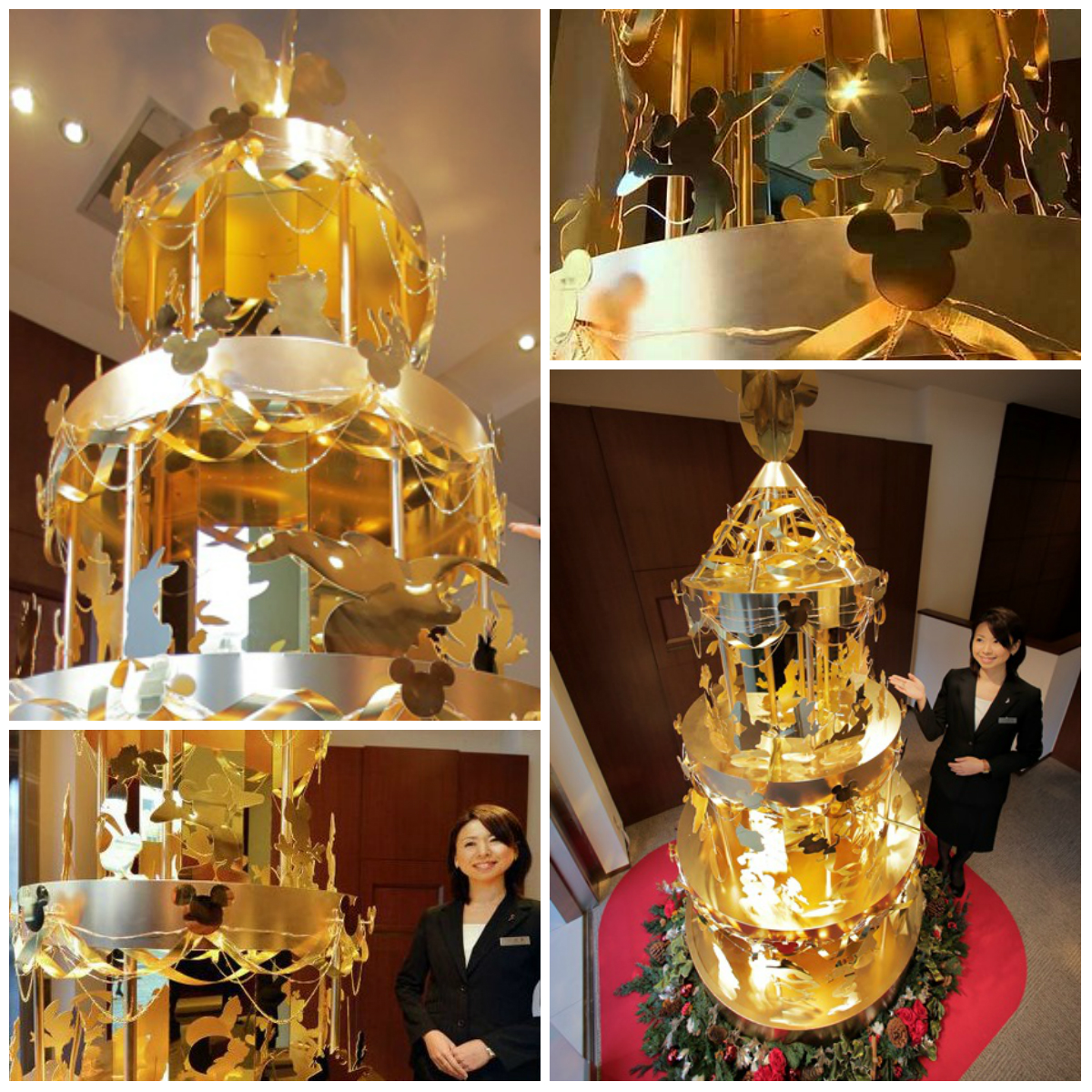 The Japanese jeweler company Ginza Tanaka got used to surprise the admirers with refined jewelry which differ from the traditional ones. This time they surpassed themselves, having created the real masterpiece from precious metal weighing 40 kg and worth more than 4 million dollars. The fir-tree was created not only to winter holidays, but also to the 110 anniversary of the Walt Disney company. Therefore instead of traditional Christmas-tree decorations there are figures of heroes from all favorite cartoons on it. You can use this idea and make your personal New Year tree from paper, for instance/

The most spectacular Christmas tree in the world 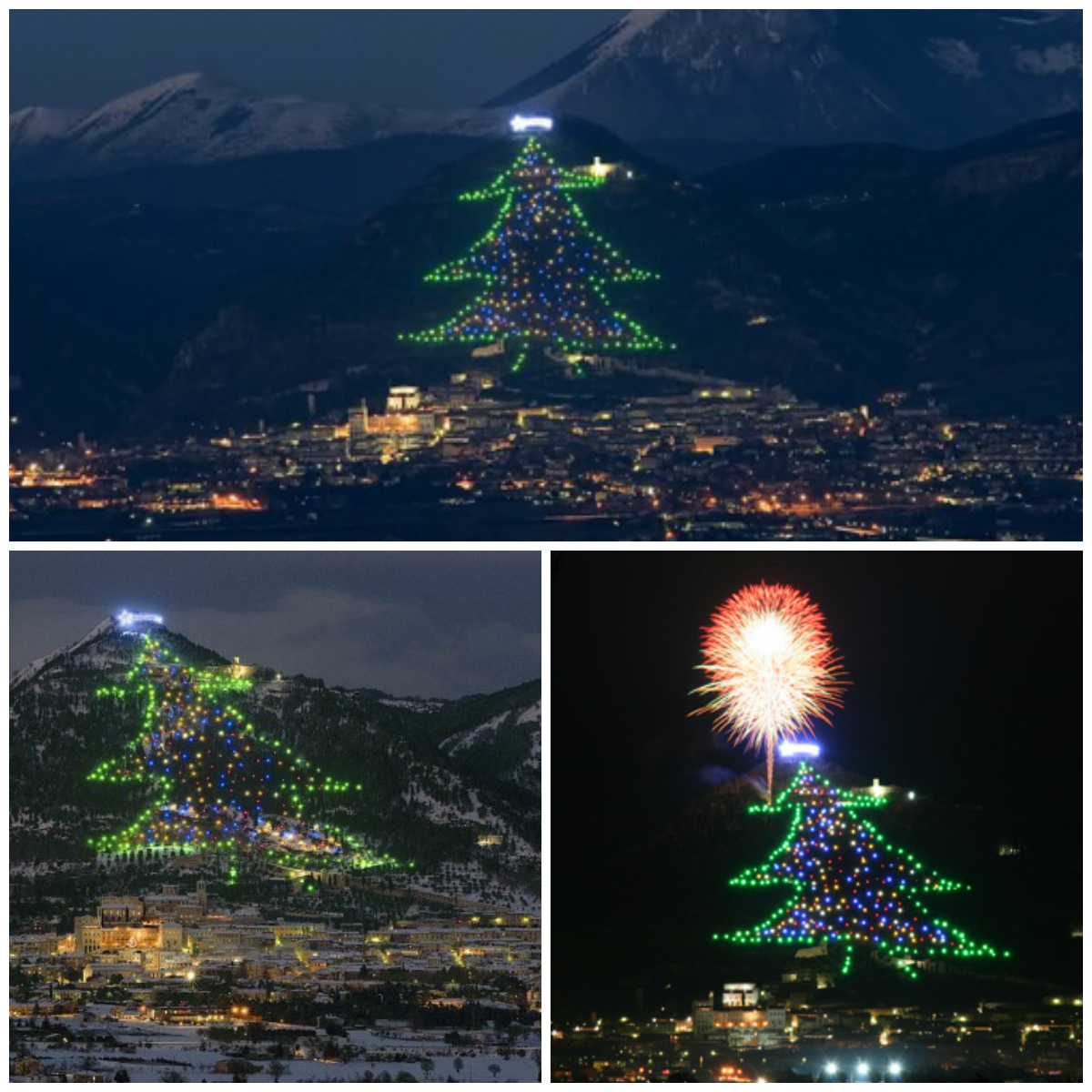 Another  record-holder fir-tree was established in Italy in the city of Gubbio. However "established" is not the most correct word. Back in 1981 when locals decided to celebrate Christmas in a special way and laid out a huge outline of a fir-tree on a slope of the mountain of Idzhino! Since then every year 3500 electric fires and 8.5 kilometers of a garland form a huge fir-tree on more than 100 thousand square meters. Such New Year's masterpiece is seen across all city and how can you resist New Year's mood?

The most expensive Christmas tree from Abu Dhabi 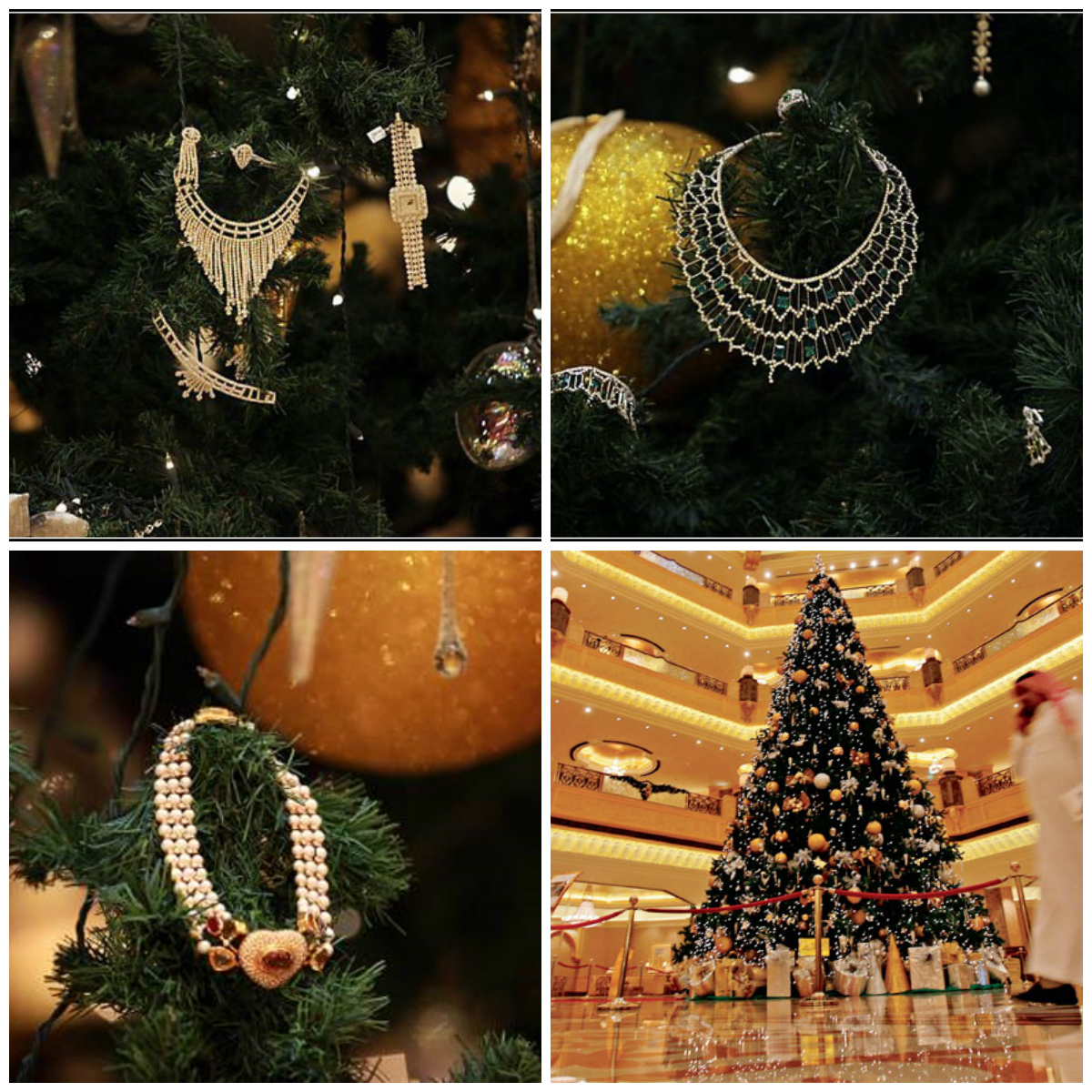 In 2010 one more record of New Year's traditions was broken, and it happened at Emirates Palace hotel in Abu Dhabi. Installation from a live fir-tree and refined jewelry from the leading designers cost more than 11 million dollars! Thus, founders of this masterpiece noted that the tree cost no more than 10 thousand dollars, and the rest was spent on gold and silver decorations and various precious jewelry, among which were rings, bracelets, necklaces, earrings and watches.

Coral Xmas tree on the seabed 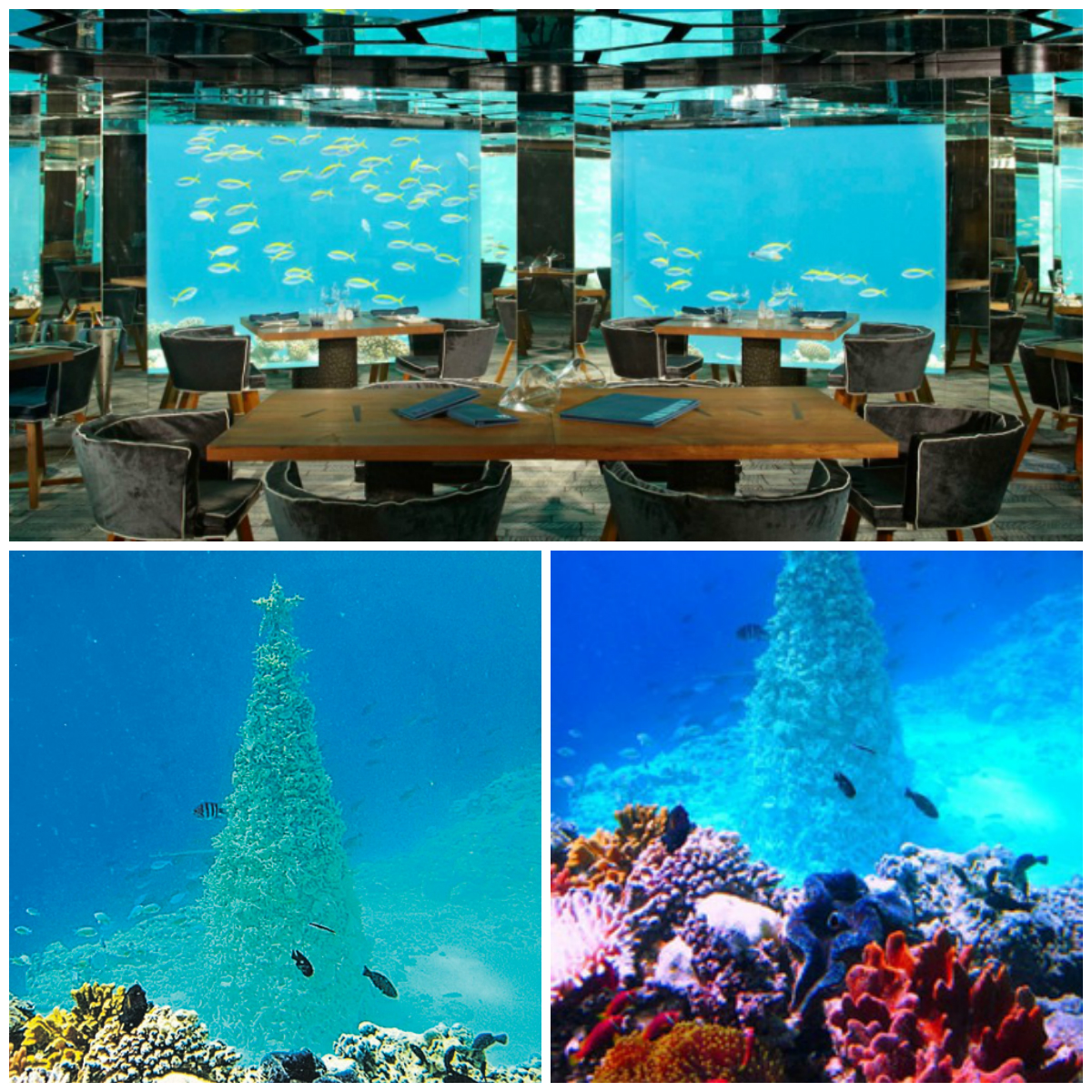 Probably the most surprising solution for the traditional attributes of the holiday season is to create an underwater masterpiece! In the Maldivian hotel Anantara Kihavah Villas, which is located in a marine reserve South Malosmadulu Atoll a unique Christmas tree is formed from broken but still alive corrals. This decision was due to the fact that visitors can feel Christmas mood, looking at it from the windows of the underwater restaurant. This design, crowned with a star, attracts many residents of the underwater world, so often all kinds of fish, rays and even turtles can be seen near it.

Hopefully this article has breathed in you a sense of celebration and you immediately wish to decorate your own Christmas tree!

Last updated: 2014-12-03
Section: Articles
Do you like this article? Tell your friends:
Author: Anastasiya Shmygina
Read also
All articles
To top